We take you where you want to go.

Free wifi is available on every bus with speeds from 2-4 Mb and unlimited data, so you'll be able to stay connected during your trip.

Every seat on every bus is equipped with lap seat belts for your safety.

We'll provide a complimentary Blue Pumpkin pastry on our long haul trips to tide you over until lunch. You'll get water and cold towels too. Our VN buses even have free coffee!

We have more legroom than our competitors because we gave up one row of seats on each bus so that you could be more comfortable.

Sometimes taken for granted, but not always guaranteed when traveling in Cambodia. Our buses nice cold air conditioning will keep you comfortable the whole way.

Bring your charger and plug in so you're able to actually use the free wifi and leave the bus with a full charge. You won't be able to take any great photos with a dead phone!

Our night bus sleeping beds aren't completely flat, but with a 15% angle you should be comfortable enough to get some sleep on the way.

The GPS units installed on every bus help us monitor driver performance and sends notifications immediately if there is an incident.

We've got you covered with passenger liability insurance through our provider Infinity Insurance.

At Giant Ibis Transport, we're not fans of onboard toilets. They take up a lot of space and smell bad. That's why we only have them on our night bus.

We use the cleanest burning diesel fuel available in Cambodia from our petrol provider Total Cambodge.

As the BirdLife International Giant Ibis Species Champion, a portion of every ticket sold goes toward the preservation of the National Bird of Cambodia. 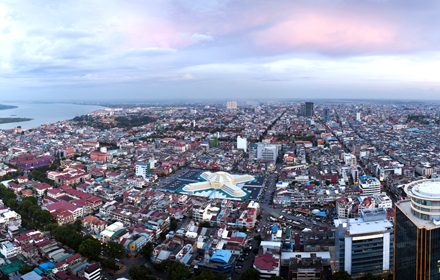 Phnom Penh, once known as the 'Pearl of Asia', is the capital and largest city in Cambodia. It is now a cultural, commercial, and political center that offers a unique blend of traditional charm and urban bustle. Today, Phnom Penh is a place of diverse economic and urban growth. A swift wave of development has brought in new high rise buildings--including a 30-storey business center--restaurants catering to every palate, and stylish hotels promising all levels of luxury. Contributing to this development are burgeoning culinary and nightlife scenes that can rival any other in the region. The alluring capital city also features a wide variety of historical and cultural attractions, along with myriad opportunities to sample local Cambodian culture. Here, classic colonial facades endure alongside sleek new eateries, golden-spired pagodas, and buzzing markets-- all evidence of the dynamic energy of Phnom Penh's city streets. Phnom Penh's famous riverfront is lined with trendy pubs, bistros, and restaurants. Stores offering beautiful Cambodian silk products and chic galleries dot the side streets. Add to this a blooming arts scene and a heady dusk-to-dawn nightlife and you'll understand why Phnom Penh has become such a well-loved and compelling tourist destination. Around Phnom Penh The vibrant streets of Phnom Penh are full of colorful sights. The city possesses an exciting range of historical and cultural attractions to tout, along with countless restaurants and nightspots. For a taste of Cambodian history and royal life, visitors can tour the Royal Palace and the Silver Pagoda located just next to the palace grounds. A short walk away, the National Museum beckons with room after room of Khmer sculpture, ceramics, bronzes, and ethnographic objects. To get a taste of city life, visitors can walk along Sothearos Boulevard, sampling local foods and patronizing a clutch of 'antique' shops that sell silver trays, betel boxes, belts, ancient coins, silver or wooden statuettes and famed marble carvings from the province of Pursat. Visitors may also find it pleasant to take leisurely strolls around Phnom Penh. Boulevards peppered by elegant colonial buildings and a bustling riverfront lined with cafes and restaurants make this a truly beautiful city to see on foot. For those interested in shopping, 'Phsar Toul Tum Poung' also known as Russian Market offers antique pieces, sundry souvenir items, and factory over-run designer clothing at hugely discounted prices. Visitors who prefer air-conditioned comfort may opt to stop in the city's modern shopping complexes (Sorya Shopping Centre, Sovanna Centre and the City Mall). A sunset cruise down Phnom Penh's Tonle Sap River serves as a perfect, relaxing end to an activity-filled day. Catch the soft river breezes and watch as Cambodia's capital begins to light up and shimmer for the evening.
The Cambodian destination descriptions above are taken from the Ministry of Tourism website and need to be cited: https://www.tourismcambodia.org/provincial_guide/#comp 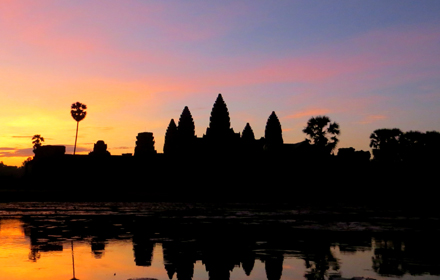 Siem Reap, located in northwestern Cambodia, is the gateway to the world-famous Angkor temple complex, which includes the magnificent Angkor Wat. The province also contains a vibrant capital city boasting many luxury hotels, beautifully-aged colonial buildings, a buzzing Pub Street, silk farms, markets, and much more. The city of Siem Reap, also the capital of the province, is a 'must-visit' destination for all visitors to Cambodia. This is where the glorious 12th Century Angkor Wat temple, the largest religious building in the world, is located. Situated on the northern bank of the Tonle Sap Great Lake, this mesmerizing eighth wonder of the world can be easily accessed by plane, land, and boat. The ruins of Angkor, located in thick jungle, are now a UNESCO World Heritage Site. There are over one thousand temples ranging in scale from nondescript piles of rubble scattered through rice fields to the awe-inspiring Angkor Wat--the best-preserved temple. Apart from the legacy of the vast Angkor temple complex, Siem Reap has a lot more to offer to tourists, from the spectacular floating village on the Tonle Sap Lake to the heritage site of the Kulen Mountain, to the recently discovered Koh Ker ruins. In town, there are a bevy of ethnic craft shops, galleries, cafes, eateries and top-notch restaurants serving every type of cuisine. The famous 'Pub Street' and the night markets of Siem Reap are now renowned tour destinations in their own rights. Additionally, silk farms, rice-paddy countryside, fishing villages and a very rich bird sanctuary near the Tonle Sap Lake make Siem Reap one of the most captivating places in the world.
The Cambodian destination descriptions above are taken from the Ministry of Tourism website and need to be cited: https://www.tourismcambodia.org/provincial_guide/#comp Kampot, the third largest coastal province in Cambodia, shares a border with Vietnam to the east and extends into the Gulf of Siam to the south. Elegant colonial architecture, spectacular natural attractions, and bucolic charm make this province a favorite among locals, expatriates, and more recently, tourists. Kampot's languid atmosphere and quaint, small-town feel are easy to fall in love with; many who stay in the province do so on the relaxed riverside, where visitors can swim in waters full of bioluminescent plankton or take a smooth kayak ride down the river. Kampot is more than just a sleepy riverside town, however. The province offers plentiful historical and natural wonders to discover, and serves as a common gateway to Bokor National Park, the beaches of Kep, the beautiful rapids of Toek Chhou and other attractions in southwestern Cambodia. Bokor National Park is popular for its cool mountain climate and remains a year-round favorite amongst locals and foreigners alike. The scenery from the top is captivating, especially in the morning hours when one can literally touch the clouds and take in the bracing mountain air. Other attractions include the Popokvil Waterfall where thundering falls provide a cool, refreshing pool to dip in. A short distance across the track, the Toek Chhou Rapids is yet another popular tourist attraction. The Prek Ampal Resort, Kampong Trach Mountain Resort and the Anlong Pring Bird Sanctuary are also worthwhile stops in Kampot.
The Cambodian destination descriptions above are taken from the Ministry of Tourism website and need to be cited: https://www.tourismcambodia.org/provincial_guide/#comp Preah Sihanouk province is Cambodia's most famous beach town. Better known as Kampong Som to locals, it is about 230 km southwest of Phnom Penh and boasts pristine white-sand beaches, unspoiled tropical islands, and a dynamic nightlife. With its palm-studded shores and warm, clear waters, it hardly comes as a surprise that Preah Sihanouk attracts crowds of locals, expatriates, and tourists eager for a beachside holiday. Do as locals do and enjoy the stretches of powdery white sand with a chilled coconut and some toothsome grilled seafood. Or, indulge in a beachside massage, take a dip in the sea, and go for dinner in any of the local restaurants that serve fresh crabs, prawns, lobsters, fish, and scallops in a mouth-watering array of styles. There are dozens of untouched islands off the coast of Preah Sihanouk: Koh Rong and Koh Rong Samlon both feature blissfully uncrowded beaches with palm-shaded shorelines. Being a beach town, there are also many sea-based activities for adventurous visitors, including boating, island-hopping, fishing, diving and snorkeling in crystal clear waters. For the expert enthusiast who wants to explore the mysterious underwater world of coastal Cambodia, the province has PADI Dive Centers and qualified instructors who know just the right spots to take you. In the evenings, the nightlife heats up, and those in search of pulsing bars and nightclubs won't be disappointed. Many entertainment venues, especially those on Weather Station Hill, stay open well into the wee hours.
The Cambodian destination descriptions above are taken from the Ministry of Tourism website and need to be cited: https://www.tourismcambodia.org/provincial_guide/#comp 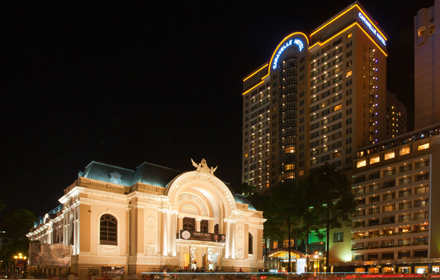 In the core of the Mekong Delta, Ho Chi Minh City, formerly known as Saigon, is second the most important in Vietnam after Hanoi. It is not only a commercial center but also a scientific, technological, industrial and tourist center. The city is bathed by many rivers, arroyos and canals, the biggest river being the Saigon River. The Port of Saigon, established in 1862, is accessible to ships weighing up to 30,000 tons, a rare advantage for an inland river port. Today, Ho Chi Minh City is the big tourism center in Vietnam, attracting a large of visitors to Vietnam. Ho Chi Minh City has various attractions as Ho Chi Minh Museum, formerly known as Dragon House Wharf, Cu Chi Tunnels, system of museums, theatres, cultural houses... Recently, many tourist areas are invested such as Thanh Da, Binh Quoi Village, Dam Sen Park, Saigon Water Park, Suoi Tien, Ky Hoa..., which draw numerous tourists. Despite its quite recent past, Ho Chi Minh City nevertheless possesses various beautiful buildings, displaying a characteristic combination of Vietnamese, Chinese and European cultures. These include Nha Rong (Dragon House Wharf), Quoc To Temple (National Ancestors Temple), Xa Tay (Municipal Office), Ho Chi Minh Municipal Theatre as well as many pagodas and churches (Vinh Nghiem, Giac Vien, Giac Lam, Phung Son pagodas...). After more than 300 years of development, Ho Chi Minh City presents many ancient architectural constructions, famous vestiges and renowned sights. It is remarkable for its harmonious blending of traditional national values with northern and western cultural features.
***The Vietnamese destination description above are taken from the Vietnam Tourism website and needs to be cited:
https://vietnamtourism.com/e_pages/country/province.asp?mt=848&uid=72 Bangkok is the capital of Thailand and, with a population of over eleven million inhabitants, by far its largest city. Its high-rise buildings, heavy traffic congestion, intense heat and naughty nightlife may not immediately give you the best impression — but don't let that mislead you. It is one of Asia's most cosmopolitan cities with magnificent temples and palaces, authentic canals, busy markets and a vibrant nightlife that has something for everyone. For years, it was only a small trading post at the banks of the Chao Phraya River, until King Rama I, the first monarch of the present Chakri dynasty, turned it into the capital of Siam in 1782, after the burning of Ayutthaya by Burmese invaders but they did not take over Ayutthaya. Since then, Bangkok has turned into a national treasure house and functions as Thailand's spiritual, cultural, political, commercial, educational and diplomatic centre.
***The Thailand destination description above are taken from the wikitravel website and needs to be cited: :
https://wikitravel.org/en/Bangkok